Enthusiasm from the headquarters of the Study Center, after the presentation on Saturday evening at Villa Mosca. By the end of September, a new meeting is planned to make known and reveal the steps forward regarding the initiatives announced on Saturday 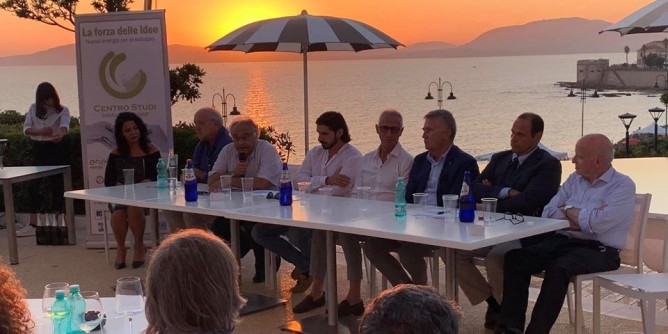 ALGHERO – «Despite the great heat on Saturday, the splendid day contributed to making the baptism day of the North West Sardinia Study Center even more unique. The organism, recently born, it has seen a grand debut in the presence of interlocutors at national level and beyond with respect to the topics covered. This is thanks to the work done by the Management of the Study Center, starting with Giuseppe Chessa, Antonio Cardin, Giovanni Nurra, Alessandro Sechi, Elena knew, Andrea Usai and Stefano Carboni ". Enthusiasm from the headquarters of the Study Center, after the presentation on Saturday evening at Villa Mosca.

Carboni opened the works with an intervention that immediately put the stakes on the intentions of the Study Center: “We have the intention of propitiating productive settlements, circulation of studies, ideas and proposals useful for the growth of the area – and again – we want to be a stimulus for the Administrations that govern our territory with effective and achievable proposals for the good of all and to make land that has become too arid in recent years fertile again ". The word is passed to Chessa that, after thanking "a very attentive and prepared audience", in the presence of the commissioner of the Province of Sassari Pietrino Fois (only politician), started the work by announcing the first of several interventions.

The president of Helais holding Antonio Stillitano, through its subsidiaries 360-degree works in the energy and renewable sectors and smart technologies, spoke about the development of projects for the generation of competitive renewable energy, that lead to the enhancement of private and public resources with respect to the environment. He developed the concept of "circular economy", with particular emphasis on the development of plastic recycling plants, used tires and municipal solid waste. This last topic was also dealt with by Gabriele Andrighetti, project manager of the plant that the group is planning in Sardinia in the industrial areas of Porto Torres and in Sulcis. Filippo Gargallo of Castel Lentini spoke about the environmental authorizations Via-Vas, another manager of the Ministry of the Environment, who explained the wind power authorizations or other impacts on the environment, highlighting the attention of the paths regarding the care of the environment.

The entrepreneur Angelo Tromboni spoke about the great repercussions of cruise tourism and the use of mooring buoys in the bay of Alghero, essential to ensure the presence of cruise ships throughout the year. A need that is closely linked to the coveted redevelopment project of the port. Plinio Innocenzi, University teacher. director of Porto Conte research and candidate for the Rectorate of Sassari, he dealt with the theme of training and the creation of entrepreneurial realities and effective companies also in Sardinia, as repeated several times, has enormous potential. Finally, Emanuele Govoni, young lawyer professor of international law, consultant for several embassies, spoke about the enhancement of the real estate assets also of Sardinian places, with the adoption of innovative finance, already in use in Anglo-Saxon countries. The Study Center has guaranteed a work and study table for each topic aimed at the formation of new companies that base their business in north-west Sardinia. The interventions closed, there was an aperitif with the best local products, in agreement with Villa Mosca and the Menjalguer project. To accompany the evening, the wonderful sunset over the bay of Alghero "which in this case represents a new dawn". By the end of September, A new meeting is planned to make known and reveal the steps forward regarding the initiatives announced during the conference on Saturday.